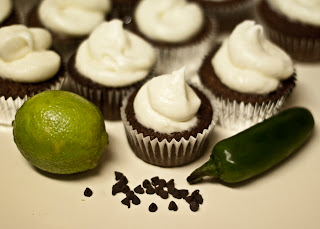 Last weekend, I was suppose to make a cupcake with jalapenos in them. However, I got stuck and frustrated making the jalapeno jelly that I was going to use as the filling so I gave up. I did follow through this weekend though!
I took the idea of jalapeno and decided to make a jelly to put inside a cupcake. For the cupcake flavor, I thought about this one time that I had a chili flavored chocolate and it was delicious, so I chose a chocolate cupcake to hold my jalapeno jelly. The frosting was the hard part for me to figure out. I was trying to stick to a theme that would taste good with jalapeno without turning it into a dinner muffin not a dessert cupcake. I went with a Cream Cheese Frosting with a little lime flavor. This sounds like a strange mixture of flavors, but it surprising turned out amazing!
Okay, so let's start with the hard part: the jalapeno jelly! If you have never made jelly before, let me tell you, it is quite the process. But now that I have done it once, I want to make jelly all the time!
I found this recipe via Google, but I couldn't get it right on the first try so I had to "re-jelly" the jelly. I think the problem was that I chose to use powder pectin and not liquid pectin, so use the liquid! It's a little pricier, but well worth it!
Jalapeno Jelly:
(Makes 6 Jelly Jars)
1 cup Red Bell Pepper chopped
1/2 cup Jalapeno chopped
5 cups sugar
1 1/2 cups Apple Cider Vinegar
1 (6 oz) Liquid Pectin
Crushed Red Peppers (optional)

Remove stems, veins and most of the seeds of the bell and jalapeno peppers. Mince peppers in a food processor.
In a 5-quart pot over high heat, combine bell peppers, jalapenos, sugar and vinegar. Bring to a rolling boil; boil for 3 minutes. (For extra heat add a few dashes of crushed red peppers.)
Stirring constantly, add the pectin and let mixture cool for 2 minutes. Now stir for 1 minute.
Pour into hot, sterilized jars and top with sterilized lids. Secure lids with bands and allow jars to cool slowly, creating a vacuum seal. (Sterilized jars are fresh and hot from the dishwasher or a hot pot of water.)


Preheat oven to 375 degrees. Beat butter until softened. Add sugar and beat until light and fluffy. Add eggs, one at a time, beating until well combined. Measure the flour, baking powder, baking soda, salt, and cocoa powder into a small sized bowl and whisk to combine. Measure out the milk and vanilla and stir to combine
Add about a third of the dry ingredients to the butter/sugar and beat to combine. Add about a half of the milk/vanilla and beat to combine. Continue adding, alternating between dry and wet and finishing with the dry.
Scoop batter into cupcake cups about 2/3’s full. Turn oven down to 350 degrees and bake cupcakes for about 15-18 minutes or until a cake tester comes out clean.

Put the butter and cream cheese in a bowl and zest some of the lime into the bowl. Cut the lime in half and squeeze the lime juice into the bowl. Whip up the ingredients until mixed well. Then start adding a the confectioner's sugar one cup at a time and continue blending until all has been combined. Then, naturally, taste to make sure you have the flavor of lime and cream cheese. Nom.
Now that you have all the ingredients made, it is time to put together this cupcake. If you have ever watched any of the cupcake shows that are on, you may have caught them with a contraption that helps them fill the cupcakes with a filling. Well, I don't have that so I had to improvise. I just used a funnel to make a hole in the center of the cupcakes and then just kind of used a knife to put the jelly in the cupcakes. It wasn't perfect, but it worked. Then I used a large ziplock bag and filled it with the frosting, cut off the tip, and then frosted the cupcakes.
As strange as this combination sounds, they actually turned out amazing. Now, if only I could figure out a name for them... Haha.

Jenna
I am a wife to a wonderful man and a mama to a gorgeous baby girl! I have traveled around the world. I love taking pictures and creating art. I love cooking & baking. I love tattoos. www.jennaebertphotography.com